It’s 2014…I’m teaching 5 sections of Earth Science and visiting my parents. They have PBS on and we’re in the middle of this documentary about World War II. Except it’s not quite that, it’s actually about one of the escape attempts from Colditz Castle: the place where any POW was sent if they had attempted to escape the German prisons.

Now just imagine that for a moment.

It takes a special kind of person to plan, execute and attempt an escape. You need to be creative, clever and bold. ::cough::gifted kid::cough my students relate strongly.

And then the Germans think it’s a good idea to put all of these brilliant, audacious minds in one place.

So one of the prisoners gets this idea: let’s build a glider out of the stuff laying around the castle and launch it off the roof by attaching it to a bathtub. It’s a crazy idea, and it’s a perfect two-body physics problem, and I’m going crazy that I can’t show this movie to my students right now.

Now I teach a full load of physics and it is an annual treat in my introductory course. First, I have my students decide what types of things will need to be taken into consideration. The questions fly: where did they get a bathtub? Where did they get concrete? How did no one see them? They actually built the glider?

Then I have them do the two-body problem. I have had them calculate whether the original specs would have allowed the plane to fly, and also had them calculate the drag force from the test run on the model Professor Hunt riggs up when they need 1.1g.

The students get an incredible history lesson, and get to see the physics they just learned in legit action. I always pause the video when Professor Hunt is rambling off how he analyzed the data to determine the plane’s acceleration and ask my students if they caught it all. Then we go back to the video of the launch. LOOK! There are distances marked on the runway! We discuss how Professor Hunt would have determined the acceleration. How plotting d vs t is the best option. How we’ve been doing precisely that with the motion detectors in our recent pulley labs.

My first year doing this I split the film up over the course of three days. On the final day I asked my students to write reflective letters to Professor Hunt.

Professor Hunt actually obliged and wrote personal letters to each of the students! 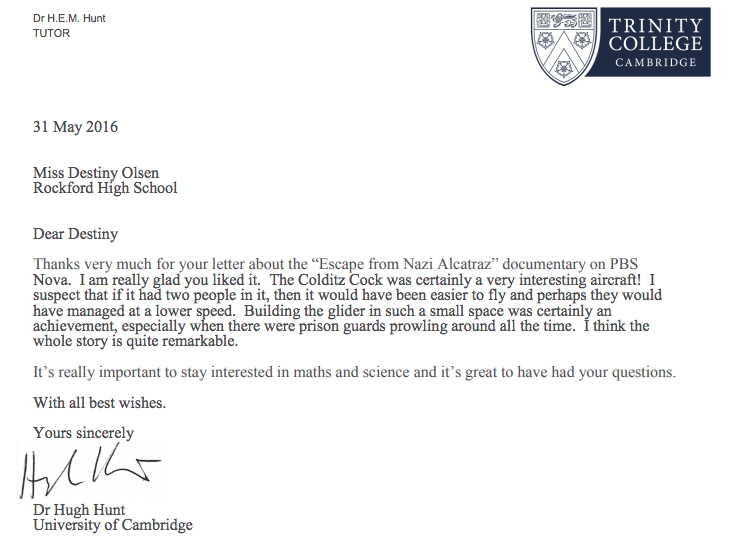 I think it’s an amazing story and my students get a lot out of it each year. When I set the video up for 7th hour after AP Physics C one of my students said to another, “oh look what they’re watching today! I love that movie!”